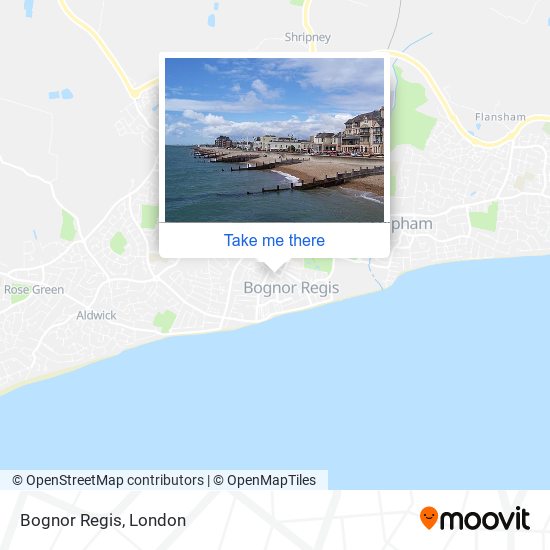 The following transport lines have routes that pass near Bognor Regis

How to get to Bognor Regis by Train?

The Most Popular Urban Mobility App in London.
All local mobility options in one app

Moovit provides free maps and live directions to help you navigate through your city. View schedules, routes, timetables, and find out how long does it take to get to Bognor Regis in real time.

Looking for the nearest stop or station to Bognor Regis? Check out this list of stops closest to your destination: Bognor Station; Bognor Regis; Morrisons; High Street.

You can get to Bognor Regis by Train or Bus. These are the lines and routes that have stops nearby - Train: SOUTHERN

Want to see if there’s another route that gets you there at an earlier time? Moovit helps you find alternative routes or times. Get directions from and directions to Bognor Regis easily from the Moovit App or Website.

We make riding to Bognor Regis easy, which is why over 930 million users, including users in Bognor Regis, trust Moovit as the best app for public transit. You don’t need to download an individual bus app or train app, Moovit is your all-in-one transit app that helps you find the best bus time or train time available.

Bognor Regis, Bognor Regis
Bognor Regis, Bognor Regis Bognor Regis is a town and seaside resort in West Sussex on the south coast of England, 55.5 miles (89 km) south-west of London, 24 miles (39 km) west of Brighton, 5.81 miles (9 km) south-east of Chichester and 16 miles (26 km) east of Portsmouth. Other nearby towns include Littlehampton east-north-east and Selsey to the south-west. The nearby villages of Felpham, and Aldwick are now suburbs of Bognor Regis, along with those of North and South Bersted. The population of the Bognor Regis built-up area, including Felpham and Aldwick, was 63,855 at the 2011 census.A seaside resort was developed by Sir Richard Hotham in the late 18th century on what was a sand and gravel, undeveloped coastline. It has been claimed that Hotham and his new resort are portrayed in Jane Austen's unfinished novel Sanditon. The resort grew slowly in the first half of the 19th century but grew rapidly following the coming of the railway in 1864. In 1929 the area was chosen by advisors to King George V which led to its regal suffix, by royal consent. Butlin's has been present in the town since the early 1930s when an amusement park and zoo were opened. A holiday camp followed in 1960 and this has more recently moved towards hotel accommodation with modern amenities.
Wiki

Image may be subject to copyright. Find out more on Wikipedia

How to get to popular attractions in London with public transportation

6 min walk
Change language
It's easier to get to Bognor Regis with the app!